Natural Organic Matter (NOM) refers to a group of carbon-based compounds found in natural water systems formed by decomposition of organic materials and associated metabolic reactions. While NOM itself does not pose a risk to human health, some NOM compounds are known to react with chlorine and cloramines in drinking water treatment to produce carcinogenic disinfection by-products (DBPs) such as Trihalomethanes (THMs) and Haloacetic Acids (HAAs).

While it is possible to remove harmful DBPs post-treatment, this is very often not economically viable. It is far more cost effective to remove compounds that are know precursors to DBP formation, and effective removal requires a rapid method for accurately detecting and quantifying these precursor compounds. Drinking water utilities are being called upon across the world to address the growing concern over NOM and DBPs, leading to a demand for a monitoring solution that can detect, quantify, and characterize influent NOM to a treatment plant.

The main objective of this study was to compare PeCOD to traditional methods for monitoring NOM in an online monitoring scenario for one year; taking note of event detection capabilities, sensitivity to changes at high and low levels, ease of operation, and total uptime over the year. 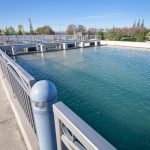